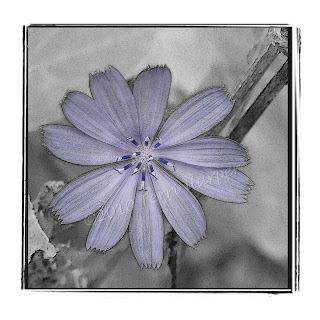 I found this growing outside the back door. It could have been the front door or the side door or anyone's else's door.
It could have been on the side of the road, in a field, in the woods or down by the river. The point is, you can find beauty anywhere, you just have to see it!

Common chicory, which is also called succory is a wild herb with lavender and occasional white flowers. Chicory is also known by a few other names as - blue sailors, endive, blue dandelion and coffee weed. This perennial herb is native to England, but is now naturalized throughout Europe, North America and Australia. Chicory is mainly cultivated for the chicory leaves and chicory roots. Despite the chicory root side effects, their usage is immensely popular as a substitute for coffee for ages, especially in England and Mediterranean countries.

Chicory Root Uses
Both chicory roots and leaves are predominantly used for culinary purposes. Chicory leaves are used as vegetables for salads and various other food recipes. Chicory roots are first roasted, then ground and then brewed to use as a substitute for coffee beans. While cultivation, chicory roots are specially treated during fall and winter , in order to produce two different types of chicory leaves, namely 'Barbe de capucin' and 'French endive' (witloof). Boiled chicory roots are consumed with butter while roasted chicory roots are used for increasing bitterness of tea and coffee. Chicory roots and seeds are also used as a sedative and it is said to be a probiotic. They also provide relief from a few medical conditions like constipation, cancer, diarrhea, cardiovascular diseases, loss of appetite, etc. There are not too many proven chicory root extract side effects, that are irreversible.
Above info from link below.
Buzzle.com
Posted by Photography By Terri Harper at 11:27 PM 6 comments: New Product at my Zazzle Store 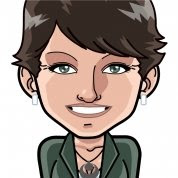 My Avatar On Etsy and Zazzle

"There is a law in psychology that if you form a picture in your mind of what you would like to be, and you keep and hold that picture there long enough, you will soon become exactly as you have been thinking." William James (1842-1910) American philosopher, psychologist and teacher

Quote of The Day

An oldie but goodie....in case you haven't seen it!

Thank you for visiting my blog!

Come back often...if you have a blog, I would love to visit...so send me your link and have a wonderful day!
EMAIL

TIME.com: Top Nation and US stories